Oh yes, onto the first of three of season 7’s biggest blunders according to fans. 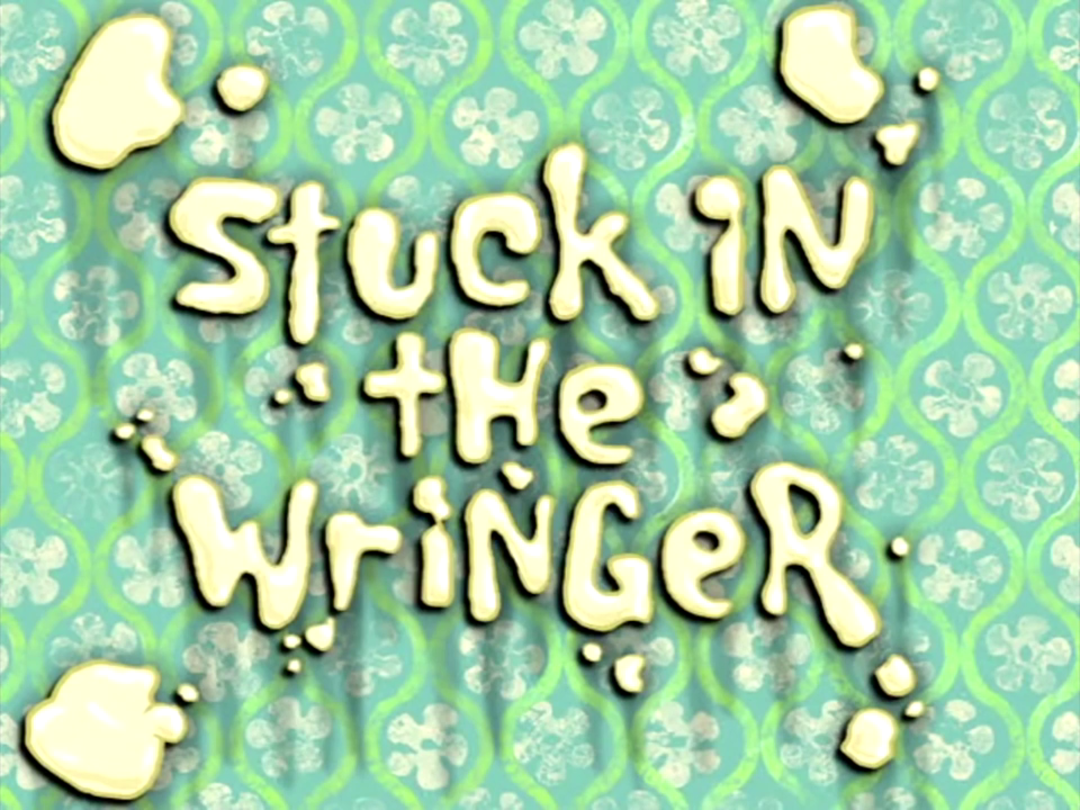 The episode starts off with SpongeBob showering like he does every common morning of the day. Heck, he even uses soap to clean his brain. Okay, that’s just very bizarre.

Our main plot gets started though when SpongeBob accidentally slips on some soap while getting dressed. Unlike what you’d expect, SpongeBob merely lands in the tub, not the wringer (which he uses to dry himself).

When trying to avoid that mistake again though, SpongeBob gets startled when he accidentally steps on a rubber duck and winds up slipping on the soap and getting (you guessed it) stuck in the wringer! Well, this’ll be an easy title to use as a recap ender.

SpongeBob tries to use his malleable body parts to his advantage here by using his tongue to turn the handle enough to free him but it doesn’t work. Probably cause he was wearing clothes at the time. Couldn’t he have turned it the other way?

Patrick comes in to find his rubber duck. So, that’s how it showed up in SpongeBob’s bathroom. I thought SpongeBob was just more childish.

When SpongeBob tries to tell his ol’ friend about his predicament of being stuck, Patrick blindly assumes that SpongeBob wants to be stuck in the wringer forever (dunno why anyone would wanna be stuck there forever, but he is a moron) and uses his forever glue on him to accomplish such an idiotic task.

SpongeBob rightfully points out how worse Patrick’s made the situation since now he can’t even more or go to work so the idiot decides to go for the next best thing: using his strength to remove the wringer off the ground so that SpongeBob can at least move. Okay, that sort of makes up for the forever glue thing. I wonder how SpongeBob can bear the heavy weight of the wringer though? Is his strength showing up now?

SpongeBob still points out that he can’t make krabby patties since his arms are still stuck but Patrick encourages him to at least try to work around his limitations in a speech akin to the one he gave to him all the way back when he initially had cold feet when applying for the Krusty Krab fry cook in episode one!

Man, I’ll give em credit for that call back so far.

SpongeBob’s motivated by this speech like he was back then and goes off to work despite being a bit clumsier. That’s the spirit!

At work, SpongeBob’s found a way to work with the wringer. He attaches a spatula to one end of the wringer and a serving tray on another side. Okay that’s really creative (though I wonder who attached those in the first place?).

While he initially has a good time at first even taking Squidward’s snarking at his “new look” as a compliment, Murphy’s law kicks in when SpongeBob accidentally sprays mustard from his holes on to Squidward’s eyes. Ouch, that’s gotta sting. Squidward’s already experienced this the hard way two seasons ago and is gonna get that feeling again next season.

When SpongeBob tries to see if Squidward’s okay, he just ends up tipping the cash register over and hitting someone’s foot. It’s not Fred unfortunately. They really missed in opportunity there.

As the injured customer just causes even more of a mess in the restaurant, SpongeBob tries to help but he clumsily falls over and ends up opening the cash register and releasing all the money all over the place for everyone to steal.

While Mr. Krabs fends the customers away from his precious money, SpongeBob only worsens the mess with his new clumsiness and crashes into Mr. Krabs and the customers.

Enraged that SpongeBob made such a big mess and put his money in danger, Mr. Krabs angrily yells at him (and doesn’t even question the wringer) and gives him his worse nightmare: the day off!

When telling Patrick about his bad day so far in addition to being treated as a bike rack by some random guy, SpongeBob breaks down and cries but Patrick ain’t having any of that!

In an attempt to cheer SpongeBob up, Patrick takes SpongeBob to Super Weenie Hut Junior (last seen in season 3) for some ice cream.

However, SpongeBob can’t properly swallow his ice cream since the wringer’s blocking his stomach. Okay, there goes his chance of eating. How is he gonna stay alive now? Eh, maybe he could still have it if it melted.

Patrick decides to try Plan B since Plan A didn’t work. Plan B is essentially going to a carnival. Well, it can only go up from here right? Wrong!

Patrick ends up winning a stuffed sea horse from a ball toss, gets to be as crazy reckless as possible on the tea cup merry go round, and wins a dart tournament while SpongeBob ends up with a black eye due to his terrible aiming skills at ball toss and gets even more minor injuries when Patrick’s crazy reckless act on the tea cup ride causes him to fall off the ride and hit some place important.

Wow, things really can get worse for SpongeBob.

Patrick tries to soften these blows by offering SpongeBob some cotton candy even though the wringer’s preventing him from swallowing food. Okay, dude are you aware of the injuries SpongeBob’s gotten at the carnival cause of your obliviousness?

This proves to be the last straw for SpongeBob who tells Patrick off for his reckless and oblivious behavior throughout the episode and causing this mess in the first place. Heck, he even ends this calling out speech with the same “Help, I think you’ve helped quite enough today” line fro Mr. Krabs earlier. Well, he sure has learned a lot from the crab.

Saddened at SpongeBob being pissed off at him, Patrick becomes upset and runs off vowing never to help SpongeBob again. Wow, looks like their friendship’s done for.

And as if things couldn’t get even WORSE for SpongeBob, the townspeople who were watching this fight, see Patrick as the victim and call SPONGEBOB out on yelling at his own best friend to the point where they claim that he deserved all his injuries throughout the episode . Okay, have they seen his injuries today? And why didn’t they defend him when Mr. Krabs made that same speech to him earlier? Are these townspeople really that one sided? Why must I ask so many questions?

It’s official, SpongeBob’s had the worst day ever.

The next day, Patrick’s trying to get his mind off his former BFF by playing with himself. Doesn’t he always play with himself whenever SpongeBob’s at work though?

Patrick tries to do some activities solo like having a staring contest with himself and playing fetch (since he’s acted like a dog before last season) but he winds up walking near SpongeBob’s house when the stick ends up near the door.

Speaking of the young sponge, he’s pretty depressed after his worst day ever yesterday and is watching static with a five o clock shadow. Okay, SpongeBob’s giving me vibes of being a depressed drunk right there.

Horrified at the sight of his depressed friend, Patrick tearfully apologizes for his reckless behavior yesterday. This little tear though falls into the wringer area where SpongeBob’s arm is and it actually manages to loosen the glue long enough for SpongeBob to get it unstuck. Wow, what irony. Patrick said crying wouldn’t help earlier and yet it did.

Realizing the solution to their problem, SpongeBob and Patrick cry their eyes out until they generate enough tears to dissolve the forever glue and SpongeBob can finally remove it with his five o clock shadow disappearing as a bonus. Guess that wringer really can clean anything.

SpongeBob delivers us the moral of the day: crying does solve problems. Okay, that’s a cool joke moral, I’ll give it that.

Easily one of the worst episodes of the show not cause its mean spirited but cause it’s so gosh darn boring with very weak slapstick and bad jokes aside from the joke moral from the end and Patrick’s speech. Definitely not one of the show’s finest hours.