The episode starts off with Mr. Krabs walking his worm while going to the Krusty Krab to check up on how the commercial’s production is doing but it turns out that Squidward’s got a ton of stuff for the commercial. How all of that can even fit in a 1-4 minute commercial is beyond me.

That looks more like a movie based on the Krusty Krab which I’d honestly see just for how over the top it is.

Despite being impressed by Squidward’s direction, Mr. Krabs promptly fires everyone involved in the so called commercial since they cost too much money. Squidward really should try to strike on his own in the art of film making. He’d be pretty good. Then again, everyone would hate his movies cause he’s Squidward.

Mr. Krabs decides to take over as the director of the commercial and decides to just use himself, SpongeBob, Squidward, and Pearl as the crew since he won’t have to pay them. He even already booked a prime time slot. Okay, how can Mr. Krabs have the money to pay for the commercial airtime and yet he still wants to fire the original commercial crew?

However, it turns out that the commercial air time is actually at 3:28 in the morning. As if any sane person would be up and watching the commercial then. Mr. Krabs really needs to take risks or else he ain’t gonna get customers. Heck, it would’ve been a lot worse had Squidward’s idea not been canned.

Despite this, SpongeBob stays up all night to watch the commercial which turns out to be very very cheap. With the mare minimum special effects and voice actors with even the microphone being visible, its’ a miracle the TV people even accepted this.

However, SpongeBob still likes the commercial and even somehow knows that he was in it even though he only showed up for 2 seconds and not even his face showed up.

The next morning on his way to work, SpongeBob runs into Old Man Jenkins who somehow can’t tell the difference between SpongeBob and a cereal box since he assumes that SpongeBob was on the cereal box commercial at 3:28 AM. Well, at least we know there are other people that stay up that late.

Despite only getting one compliment, SpongeBob’s ego starts to grow. This continues when Nat calls him SpongeBob (even though he wears a name tag) and also opens the door for him (he was actually opening the door for himself). I get the feeling that SpongeBob had confidence issues as seen in his boating tests and is using the commercial as a way to raise his self esteem.

Fred also asks for a napkin but SpongeBob interprets this as wanting an autograph somehow and mistakes a derogatory comment from Fred as his signature. “To my tail fin.”

Squidward tries to ask SpongeBob to back to work but SpongeBob again assumes that Squidward wants an autograph and gives him the one he intended to give to Fred.

SpongeBob also starts to mistake the customers happiness of finding something as praise for him. Now, this is solid proof that SpongeBob has confidence issues and is using this as an opportunity to boast it.

Mr. Krabs catches wind of SpongeBob’s egotism and tries to keep him from annoying the customers by making him clean the bathroom.

While SpongeBob’s cleaning the bathroom, he overhears a conversation from Lou and Dale on how great Glenn the Pinkfish is and that he should go solo which SpongeBob mistakes as compliments for himself even though he never sang in the commercial. Staying up late will do that to ya.

Bill and the customers start to get restless and demand that SpongeBob give them what they want. However since they never specified that they wanted krabby patties, SpongeBob just assumes that they want him to sing and sings a song about Bill’s stripped sweater. Okay even if SpongeBob’s delusional, his singing is kind of decent. 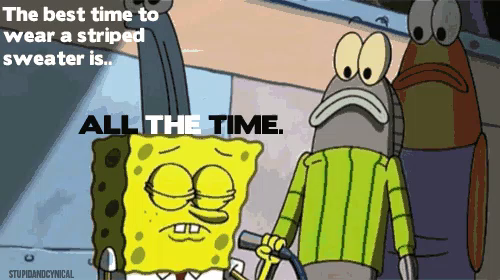 Squidward tries to knock some sense back into SpongeBob asking him to give the customers their krabby patties but SpongeBob just assumes that they want him to juggle krabby patties. Geez, SpongeBob’s mega delusional now.

When the customers angrily ask if this is some kind of a sick joke, SpongeBob assumes they want jokes too. SpongeBob really ought to be specified more so that his mind won’t make up an excuse to be delusional.

Eventually, SpongeBob trips on some grease and ends up dropping the patties on the grill.

Mr. Krabs congratulates SpongeBob on calming down the customers even though SpongeBob’s still unaware that his so called act is just making the same fry cooking he always does. Mr. Krabs manages to out some sense into SpongeBob offscreen and SpongeBob’s back to normal by the next episode.

Not the best season 3 episode but still amazing especially the stripped sweater song.